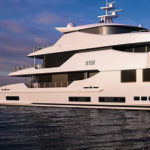 Is an Italian shipbuilding and Boat building company based in Viareggio, Livorno, and Fano, owned by Azimut.

Benetti designs and constructs motoryachts, and is one of the leading builders of custom superyachts, having won the Showboats International magazine “shipyard number 1” award six times in a row, the only yard to have done so.

Founded in 1873,[2] when Lorenzo Benetti (1844–1914), bought the Darsena Luca shipyard to found the Benetti shipyard.[1] The yard built commercial vessels,[3] including fishing boats and Mediterranean trading ships. On his death in 1914, his sons Gino and Emilio took over, and renamed the yard Fratelli Benetti. They continued using wooden construction, but now built ocean-going ships, and some private yachts. After the death of Gino in 1927, his sons Gusieppe and Virgilio took over his share, while Muarizio and Bertani assisted their father Emilio.

100 Best Things to do in Italy